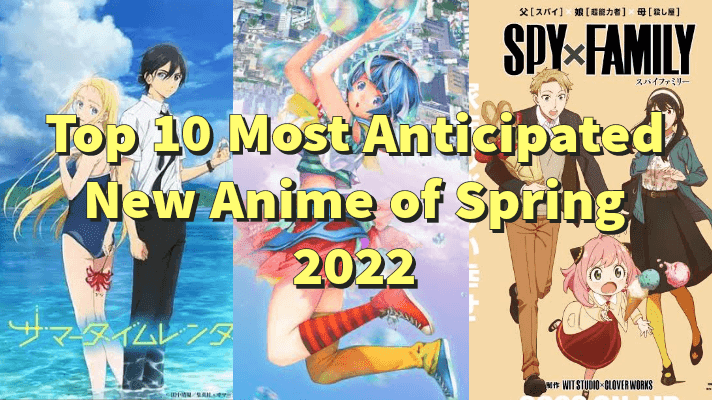 Spring is here and it is time to list the most anticipated new anime of spring 2022. Readers this list will be full of new anime series as well as movies.

10. Skeleton night in another world

Now that's a title that doesn't leave much to guessing exactly what it says in the title and it's next in line of the video game. It's the kind that we've been getting for years now gamer who falls asleep wakes up as a skeleton Knight much to his dismay taken on the name Arc. He then meets an elven warrior who sets him off on his adventure. An overpowered character in an Isakai that's taking on a skeletal appearance doesn't that remind you of an overlord. I mean it sure does for me, but what I appreciate with skeleton knight is the rather lighthearted star it's quite comedic and I can't get enough of Arc's antics as he takes the knight part of his name quite literally. It is a fine read as source material, nothing too groundbreaking, but something that will be fun to watch especially if you enjoy overpowered characters in Isakai.

Tell me if you've heard this before two members of battling forces always find themselves at each other's throats. However, once the cameras stop rolling and their public life fades the two pursue their forbidden love. Our unlucky heroes this time are Fudou of the Gelato and Desumi of the villainous organization Gecko. Being on opposite sides of two factions is difficult enough but imagine upping the ante with their roles as heroes and villains their schedules and assignments only serve to add more problems on their road to love. But the two are determined to make this relationship work and not even the most diabolical plans of world domination will stop them. It's a setup we've seen quite a lot already but love after world domination looks to add to the library of these Romeo and Juliette sequel stories with its focus on tokusatsu power rangers parody. It's quite a funny take on a story beat that we've grown to be familiar with and it could be an easy watch for you to enjoy this season.

Reina Aharen is a lot of things small cute and adorable all serve well to describe her. however, she's also a ball of surprises completely ignoring the concept of personal space and being filled with antics that are bound to drive anyone mad. Thankfully super imaginative Raidou is perfectly equipped to handle any storm Aharen whips up, this soon leads to a misunderstanding that sets forth one of the most unusual friendships between two peculiar personalities. Thus begins a hilarious rom-com where the two dimwits and the very diverse cast around them show off some of the craziness that you wouldn't expect to see. Out of the seemingly mundane situations, therefore, making it a perfect watch if you're looking to unwind with some school wackiness.

Nagi always seems like he doesn't belong with the rest of the hyperenergetic Umino household. Well, it shouldn't surprise anyone that this introverted young man really isn't a member of the family who has been switched at birth with another baby. As crazy as that sounds what's even crazier is that Nagi has been arranged to marry social media star, Erika Amano. That's a tad bit unfortunate for Nagi. However, he has his sights set on another girl, his intelligent classmate Hiro Segawa. Looks like our protagonist has found himself caught in yet another whirlwind of love and it's going to take a miracle and all sorts of hijinks to navigate his way out of this.

Here comes the sports show of the season I've briefly talked about Ao Ashi. I think it rightfully finds its place as one of the most anticipated new anime this spring. Like many aspiring athletes, Ashita Ao dreams big. Unfortunately, his dreams of getting into a high school with a good club never came to fruition due to an incident that was his fault. However, the game is never over until it's over and his talent catches the eye of some talented scouts who give him a second chance. As during the typical high school tournament setting Ao Ashi takes the sports genre further with a focus on actual ball clubs and a greater emphasis on realism not only does it give you a glimpse of the football club system in japan, but it also provides some good character growth to accompany. If you feel that the typical sports anime is way too shonen a sequel could be the alternative you're waiting for.

Do you trust your friends with your lives that's the question posed to us by the appropriately titled Tomodachi game? When Yuuichi and his friends find themselves kidnapped by a Manabu-Kun. They are forced to play what the mascot calls friendship games that will test their bonds and trust with each other or to settle a large debt and snuff out a traitor. It's here that they soon find out that perhaps their friendship isn't as strong after all and things look even shakier after a series of betrayals further proving the adage to keep your friends close but your enemies closer. It's time for the big brain pseudo-psychological show of the season domination game starts off slow but it does pick up quickly holding me in constant anticipation of what gonna happen next. I really appreciated the high-stakes mysteries and the characters in manga form so here's to hoping that everything translates well in anime format too.

Stood out for some time loot thrillers summertime render is here for you.  Shinpei didn't expect much in his return to his hometown of Wakayama. He made it back to attend a funeral of a childhood friend but some things about Ushio's death seem a miss the forces of darkness are at work and creeping shadows threaten the lives of those he holds dear. It's a family reunion gone to hell armed with the uncanny ability to turn back time upon death. It's up to him to stop the encroaching darkness and lead everyone to the greatest happy ending. If you're up for something like erased or re-zero this is a show you ought to be on the lookout for. I think summertime render improved on some aspects of those such as adding even greater stakes to the mix and upping the whole mystery aspect. I'm calling this to be a sleeper hit for the season and I wasn't surprised about the fact that many people are looking forward to it.

03. Shikimori's Not Just a Cutie

At first glance, you think that Shikimori and Izumi are your typical lovey-dovey couple they walk home from school flirt they tease each other a perfect couple. However, she is occasionally not so charming; instead, she becomes the coolest girlfriend in the scariest way possible! Her demanding presence and earnest concern for Izumi's wellbeing never ceases to take his breath away. With the cute yet cool Shikimori now by Izumi's side, his luckless days are over, bringing a life full of happiness and warmth.

The second most anticipated anime is not a series but a movie its finally here the anime movie spectacular that combines some of the greatest in the industry is here to take the world by storm. Bubble takes us to a Tokyo that looks nothing like the bustling metropolis that we know. Bubbles have descended breaking apart the laws of gravity and turning Tokyo into a hot spot for the coolest sport in town parkour team battles that have participants leap from building to building hotshot parkour team. Prodigy Hibiki then takes one risk too many and finds himself plummeting down into the sea where he meets the mysterious Uta. A chance meeting or a union crossed by fate, whatever it is. This encounter that opens them up to the truth of the world name recognition can only take you so far but from what I've seen in the trailers bubble looks to be an amazing title that could be a contender for original anime movies of the year. The plot synopsis does have the potential for some mystery and romance and I'm really liking how beautiful everything looks something you want to keep your eyes out for.

Our most anticipated new anime this spring is spy family. spy family has been building steam for quite some time. Now the manga has become so popular that, now's the time to strike with one of the biggest hits. Well see this year's spy family, in a nutshell, is about a secret agent forming a pretend family for the sake of his mission. Turns out that, his pretend family is made up of an undercover assassin and a child with psychic powers. What makes the spy family so good to catapulter into the number one spot on this list. The concept of a fake family going undercover for their own purposes may not seem like a novel but spy family is a show that nails it perfectly. I just adore the dynamic between the main characters and it's truly a joy to watch the contrast and balance between them dealing with their assignments and the everyday challenges of family life it's quite ridiculous but in a good way and it's a complete joy to read on a semi-related note.