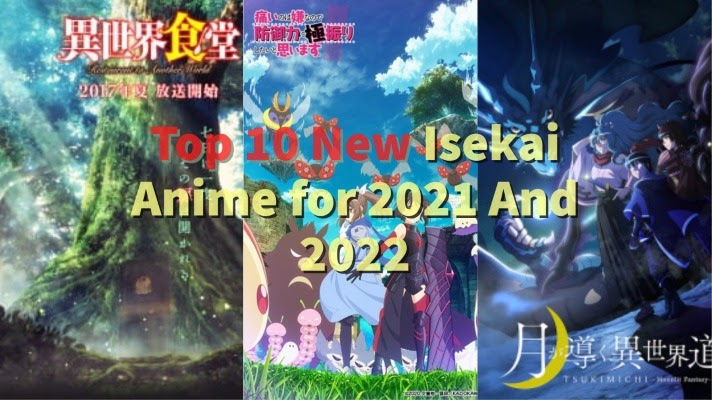 An absolutely fantastic fantasy series that has seen a great deal of success as a light novel and manga finally getting a chance as an anime tv series that is still very much in its early days with only a few episodes out so far. The faraway paladin has sent waves across the anime community and that is more than enough reason to check it out. Set in a city that has been ruined in a world that is still recovering from the loss of human civilization we meet a human child by the name of will this young boy is raised by three undead creatures the warrior blood the priestless mary and the mage Gus. Each of these undead beasts loved the human child dearly and taught him everything they know but, as time goes on the young human starts to question why he is different and sets off on an epic path to learn the truth of this world and what really happened to humanity. It's rare to come across an Isekai series that creates a brilliant character and a strong core desire but still lays out an interesting and fantastic road ahead of them.

09. The Dungeon of the Black Company

This series is said to be absolutely awesome and we really recommend that you check it out take a completely different look at the traditional Isakai series with an mc that is quite unlike most that you've come across. Kinji Ninomiya is a full-blown neat that has earned enough money through real estate and now lives a stay-at-home penthouse lifestyle and never has to work another day in his life but the story kicks off with Kinji being transported to a fantasy world and being forced to work for a horrible mining company. Basically treated as a slave and being forced to extract crystals out of a dungeon Kinji misses his old lifestyle and is desperate to no longer be a slave and to earn and rise up as fast as he can looking to get that financial stability by any means necessary. He meets up with an interesting group of adventurers and forms the black company.

One of the most criminally underrated anime series out there it's hard to understand why most of the anime community overlooks this modern classic in Isakai and fantasy storytelling. Before we present some absolutely charming characters alongside its interesting core story with some brilliant arcs that had us hooked from the very first episode. Kaede Honjou was brought in and started playing this brand new VR computer game with her friend. Afraid of taking damage or mc just maxes out her defense abilities because of this Kaede walks insanely slow and has no magical abilities at all but her high defense lets her take most hits without taking any damage. Whatsoever, this led to an absolutely brilliant series in which our hero needs to use some creative thinking in order to get some crazy accomplishments in the game slowly but surely Kaede becomes one of the strongest players around and can't help but get caught up in some awesome adventures fun and light-hearted but with an epic sense of adventure. We absolutely cannot wait for season 2 to hit us there is still some time to catch up and get involved in the brilliant world of Bofuri.

A fantastic Isakai series and its first season showed us just how powerful and imaginative the source material actually is. We are quickly dragged into a world of death the afterlife and the supernatural in an interesting blend of genres with a strong core mystery at his heart. The spirit chronicles constantly had a second-guessing ourselves in anticipation for what was next to come we learn of Haruto Amakawa a young man that died when looking to reunite with a childhood friend then reincarnated into the body of a boy. Living in the slums by the name of Rio. Rio has his own mission having witnessed the death of his mother. Rio wants to avenge her but Haruto also occupies his body and the two conflicting personalities are forced to get along with one another working together with both Rio and Haruto soon get dragged into an epic tale of kings and queens and kidnapped princesses traveling across this awesome Isakai world and meeting a whole cast of awesome characters along the way.

06. Restaurant to another world Season 2

This is an anime series quite unlike any other with a focus on cooking across a fantasy world. It's a high trait that's the way we get fleshed out we learn of a high-quality restaurant that is situated in a relatively sleepy part of Tokyo during normal business hours this restaurant serves a lot of Japanese and western cuisine although officially closed on the weekends. The doors secretly open on Saturday but these aren't just normal doors but rather magical doors to another world a magical Isakai world filled with elves and dragons and other brilliant fantasy creatures that come in and enjoy all the exciting and exotic food that the restaurant serves up. After a while, we start to get used to the magical guests and regulars as the series passes we slowly learn more and more about its customers and the awesome Isakai world they come from we see relationships develop and friendships made a long-running anime series with its newest entry set to hit soon. A seriously underrated series that we cannot wait to get back and tune into.

We seriously cannot wait for the anime release of this series since its announcement in early 2021. The art style alone of this manga is truly something awesome and the few clips we were able to see in the trailer really got the anime community extremely hyped up for its January 2022 release the anime will most likely borrow heavily from the light novel and will start off following Canya on life support after a horrible accident our hero is paralyzed and she can't leave her bed forced to spend her life out living in an ultra-realistic virtual reality game that is set in the land of leadale. One day Canya realizes that she is no longer just playing a video game but is actually transported and living in it getting a second chance at life and living it out as an elf it's a lot easier going and relaxing as opposed to most fantasy Isekai there are. No real demon lord and world-changing events. Calm and enjoyable with a fun bunch of characters we follow. Canya is on her awesome new adventure in the brilliant land of leadale.

04. Banished from the Heroes' Party

With a really interesting and brilliantly thought out poor premise this is a series with a strong concept behind it that really manages to entertain through its short form and engaging slice of life format the story kicks off with Rit a former member of a powerful hero party banished and kicked out for being weak and causing them many issues. Red was supposed to become one of the heroes that would ultimately save the entire world but is now forced to live out his life in a quiet village. Pretty hilarious and forced to live an insanely slow life compared to the one that he used to. We slowly meet a very strong cast of supporting characters that perfectly complement and elevate the engaging slice of life adventure we can't help but follow along.

03. The World's Finest Assassin Gets Reincarnated in Another World as an Aristocrat

Gets reincarnated in another world as an aristocrat an absolutely brilliant series that had us hyped for the longest while still running through the very first season and just as awesome as we'd hoped the world's finest assassin doesn't innovate but delivers a really polished and engaging anime series. From the very first episode, we learn of one of the greatest assassins on the planet an old man that has seen countless killings but is now looking to retire but he is still constantly hunted by many of the people around the planet. The planet he is on is sabotaged and he could not save himself after death the world's greatest assassin is reincarnated by a goddess that brings him back to life in a world of swords magic and fantasy. This brilliant Isekai world really needs him because it is set to be destroyed by the hands of the hero the assassin accepts and is born again as a nobleman in this world looking to live his life to the fullest and trying to appreciate every single moment. He has at his second chance this is an anime series that is still in his early days and the perfect time to jump in and get involved.

02. How a Realist Hero Rebuilt the Kingdom

Think back to the number of times you've been checking out an anime series or even just watching a movie shouting at the mc why would he do that that doesn't make any sense I do a way better job this is a series that really looks to address those questions head-on in one of the most awesome and brilliant mc's you will ever come across. Kazuya Souma is summoned and transported to the Elfrieden Kingdom. It's a kind of world in order to deal with the serious threat of the demon lord but instead of adventuring off in this Isakai realm and looking to battle the demon lord, he finds himself made king and looks to make some huge changes across the kingdom in order to make the standard of living a lot better for the poor and the middle class. Our heroes soon dragged into political battle within the castle walls in one of the most interesting and captivating anime series that we have seen in a long time truly original and unlike anything you've ever come across do yourself a favor and check this out.

A long-running series that started off as early as 2012 and has seen nothing but success as a light novel and manga series finally seeing an anime adaptation this is Isakai fantasy series is not for everybody but we guarantee that it is quality quite unlike any other compared to most Isekai animes with an mc that is loved by gods and teleported with special powers and abilities as opposed to Tsukimichi that has our mc actually hated by a god. Moonlight fantasy is able to go through all the Isekai fantasy classics with an interesting spin on things following an average guy Makoto Misumi getting reborn and expecting some awesome powers in a brilliant world. however, the goddess hates him and throws him into an absolute wasteland of this Isekai realm but that does not stop her hero as he rises up and overcomes all sorts of crazy hurdles in his path alongside some interesting fellow adventurers a powerful dragon and a spider monster. With the first season wrapping up recently with an absolutely epic ending fans cannot wait for the upcoming season that is set to hit soon.